We try to make birthdays a special occasion here! We always start with a traditional “birthday breakfast” of their choice. This varies depending on the family member, but typically involved using some maple syrup, butter and fruit! Since we eat paleo now, treats for the birthday gal or guy has taken us to some new creative heights as we try to recreate warm fuzzy memories. We want to keep it tummy friendly and still provide that something special kinda moment for them.

Be sure to also give our new PALEO WAFFLE CONE recipe a try as well!

This year is no different! I’ve wanted to make waffle cones so I could recreate a “drumstick” ice cream for a couple years now. This man of mine, loves ice cream…period! All kinds! With cake, with fruit, with chocolate…yep, all kinds all sorts of ways. His birthday is in the summer so I thought it’d be fun to try and get this hand held summer favorite ice cream treat made…and I’m quite sure it will be a huge success!

Started with Otto’s cassava flour and the rest was easy. Well, OK…I finally had to get the pizzelle maker to complete the project. I got this one: and used these cream horn molds to make our cones.  As is typical with this guy, for his birthday I usually seem to get a new kitchen gadget! Like last year, his birthday fell on Amazon’s “Prime Day” and we were on a road trip to southern Utah for some hiking when I saw a tweet that the Instant Pot was on sale for a killer price. So this man of mine, pulled over where we had service and insisted I get it…on his birthday! Adorable! This year it was a pizzelle iron…however it had to come before his birthday so I could get this recipe created before the big day.

Create I did and it’s amazing!!! We couldn’t be happier with it and hope that you find all sorts of things to do with it! We made little bowls by placing the hot pizzelle over the bottom of a little bowl and then placed another bowl over the top. Once cooled, we painted them with chocolate. If that’s not the best bowl for some ice cream…wowser! We folded them over some bamboo skewers while they were hot and tadah…we have waffle taco shells for choco tacos! Or simply leave them flat and they are great little cookies.

1. In a medium bowl, whisk cassava flour and baking powder together, set aside.
2. In another bowl, add eggs and maple syrup and mix with an electric mixer until well combined.
3. Add melted butter and vanilla to egg/syrup mixture a continue mixing til all ingredients are well combined.
4. Pour this mixture into the dry ingredients and using mixer, slowly combine all ingredients. The batter will thicken up a bit as it sits.
5. Pre-heat pizzelle iron according to manufacturer’s directions and begin making pizzelle’s.
6. Makes approximately 24-30 pizzelles, but depending on how many you eat while you’re making them…quantities may be less!

backporchpaleo
•
Follow
Hi Friends, many of our fun recipes, perfect for MEMORIAL DAY, are on our blog & available via the link in our profile. From grilled delights, to desserts to ice cream etc...there's something for everyone. . We definitely hoped to feel up to sharing a couple new recipes for this coming holiday weekend, but given the anguish, sadness & overall unbelievable events of this last week, it's just not going to happen. Just keeping things real, as creativity is nowhere to be found here! And this isn't to imply that anyone that is posting new things is "doing it wrong" - this is literally just how it is "here, for us" - #youbeyou . If you want to stay informed, we continue to look to @sharonsaysso for accurate information & resources for making a difference moving forward. ENOUGH IS ENOUGH & things MUST change. It's literally a matter of life & death. Sharon also has resources for getting help to the families of Uvalde, whose lives are forever changed. . We may or may not be sharing about our upcoming weekend in Southern Utah, still undecided. We are headed south for some "nature therapy" & hiking in our beloved Red Rocks. Take care of each other m'kay & will be back next week after the holiday. Thanks for being here & we'll see you soon! . Recipe roundup via the link in our profile! ENJOY!! https://backporchpaleo.com/category/memorial-day/ #backporchpaleo #memorialday #holidaiyeats #weekendeats #paleoeats #comfortfood #getoutside
View on Instagram |
1/9

backporchpaleo
•
Follow
🍋 coming in so Springy! our LEMON CURD LINZER COOKIES are dainty gems! Made with our PIE CRUST recipe or you can use our PIE CRUST MIX from @legitbreadcompany ~ 🍋 . Subtly sweet & bursting with lemony zing! A wonderful recipe for what we like to call "dessert prep" - cookies & lemon curd can be made days in advance. When you're ready to enjoy (or impress those BBQ guests) these are minutes away from enjoyment! One can never be too prepared for dessert, right?! . YUMMMMMM! . Simple recipe via the link in our profile! https://bit.ly/3usLlAa . @food52 @ottosnaturals @nocrumbsleft
View on Instagram |
2/9

backporchpaleo
•
Follow
It's TACO TUESDAY! Not just any tacos, SHRIMP TACOS! A classic taco that's ready in minutes with @butcher_box shrimp! We enjoyed them tonight & so could you! . NEW MEMBERS can get 1LB of RAW, WILD CAUGHT SHRIMP that are PEELED, DEVEINED & have tails removed for 1 YEAR ~ all delivered right to your door! . If you've been considering getting started with Butcher Box - this is your MOMENT! Follow the link in our profile & DO IT! . https://bit.ly/399DFNA @ottosnaturals
View on Instagram |
3/9

backporchpaleo
•
Follow
🍵 [new] 🍵 MATCHA MACADAMIA NUT MUFFINS - perfect for that Spring Brunch or any weekday morning & that stunning color is brought to you by our friends over at @jadeleafmatcha - America’s #1 selling farm-direct Japanese Matcha! 💚 . Jade Leaf’s pure matcha powder is certified organic, pesticide free, sustainably sourced from a single source in Japan from generational farmers who’ve been in the matcha business for almost 200 years. How amazing is that!? . Grab that muffin tin & get baking friends! You’re going to enjoy the subtle notes of matcha paired with buttery macadamia nuts baked inside. Truly such a scrumptious way to enjoy matcha, getting all the benefits in every tasty bite. . Use our discount code: BACKPORCHPALEO20 to stock up on all the Jade Leaf goodness. Hit us up with any questions you might have! . Grab the super easy recipe via the link in our bio! https://bit.ly/3FtpwXH
View on Instagram |
4/9

backporchpaleo
•
Follow
CHOCOLATE MADELEINES - Happy FriYay friends!! Some #fingerfoodfriday goodness & how cute are these pillowy cakes!? Soft & oh so chocolatey with a sprinkle of coconut or even a sprinkle of chopped nuts, so fabulous. . These are such a perfect little treat or even a great "secret friend" gift to drop off to someone that you think might need a little "lift" to their day. Given the crazy of the week, you might need to make a double batch!! 😠 . Let's have a spectacular weekend! . Recipe via the link in our profile ~ @ottosnaturals @food52 . https://bit.ly/2yDv8AJ
View on Instagram |
5/9

backporchpaleo
•
Follow
💃 For all you Cinco de Mayo party fans, are you ready to enjoy some deliciousness!? We have an ebook with over 40 Mexican food recipes, with a paleo twist. . Corn-free Tamales, dairy free queso, chili rellenos, fried ice cream, breakfast gorditas + & some very fun beverages & 7 salsa recipes! Just a sampling of what's inside. For today & tomorrow only, we're having a 50% sale on our ebook PALEO OLÉ!! . Use the code: MAY22 at checkout & an electronic copy will be sent right to your inbox. . Follow the link in our bio http://bit.ly/paleo_olé_ebook . @ottosnaturals @food52
View on Instagram |
6/9

backporchpaleo
•
Follow
🥭 COCONUT LIME SEMIFREDDO a tasty NO-BAKE dessert that can be made days ahead of time & topped with whatever fruit suits your tastes. We of course went with sliced mango, a classic pairing! . Frozen coconut mixture with hints of lime & only subtly sweet. SOOOO YUMMY! . This treat is a remake of a dessert that holds a special place in our hearts. In 2012 I made this for my mom on what would be the last Mother's Day I spent with her. 😢 She passed away later that year & we are still in disbelief that she has been gone almost 10 years. . She absolutely loved it & so it was important to get it reworked to a diary free version to enjoy for years to come! 💜#missyoumom . Recipe via the link in our profile ~ http://bit.ly/2uYjdrC
View on Instagram |
7/9

backporchpaleo
•
Follow
💃Paleo SOPAPILLAS ~ Happy weekend & how is it already May tomorrow!!! Time for some Cinco de Mayo fun with these fluffy, golden, warm pillows of fried goodness so perfect for the weekend or all those upcoming Cinco de Mayo meals this week. . Check out the #recipebelow ~ sharing it from our ebook…follow the link in our profile & grab a copy of 👉🏻👉🏻 Paleo Olé! 💃 We have over 40+ Paleo Mexican recipes, including a corn free tamale, dairy free queso & 7 salsa recipes! . - coconut or avocado oil, for frying - ¾ cup cassava flour - 1 tsp baking powder - ¼ tsp fine sea salt - 1 tbsp sustainable lard or organic shortening - ½ cup + 1 tbsp room temp. water - honey, for serving - maple or coconut sugar (opt) . 🍯 You’ll need about 4" of oil for frying, use a heavy bottomed pan that accommodates this & a long handled strainer to remove them. 🍯 In a medium bowl, combine flour, baking powder, salt & lard - work together with your fingertips until you have a crumbly texture. 🍯 Add water & mix with a wooden spoon until it all comes together, knead dough between your hands for about a minute. Wrap in plastic & let dough rest for 30 minutes. 🍯 Begin heating up oil, you’ll want it to be about 375-385̊ - use a thermometer, if oil is too hot they will NOT puff up when you fry them. 🍯 Roll dough out between two pieces of parchment paper, lightly dusted with flour, to approx. ¼” thick. 🍯 Cut into triangles about 3½” at their widest part or cut them into squares. 🍯 Drop into hot oil one at a time. They should sink to the bottom, then float back up to the top & begin puffing up. Once the bottom side is brown, flip over & continue frying until both sides are golden brown. 🍯 Remove from oil to a paper towel lined pan & repeat with remaining dough. Keep fried sopapillas warm in the oven set to “warm”. 🍯 Serve with honey & a sprinkle of maple or coconut sugar . http://bit.ly/paleo_olé_ebook @ottosnaturals @food52
View on Instagram |
8/9 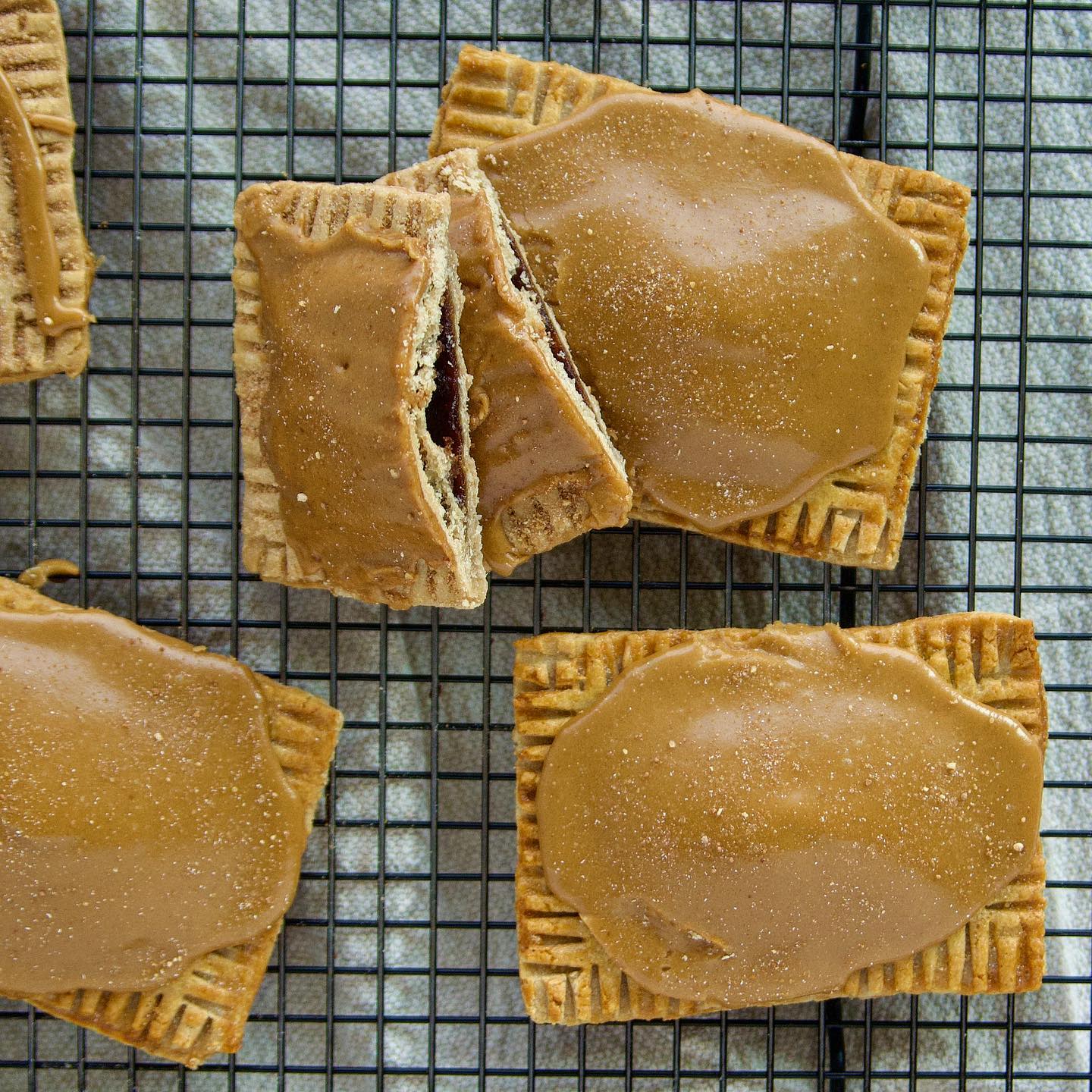 backporchpaleo
•
Follow
😋PALEO BROWN SUGAR CINNAMON POP TARTS - the tarts that started all the "pop tart" love over on the blog! A tasty midweek pick me up for your taste buds! Taking requests for a new flavor pop tart for the blog!! What's yours? . Use our original PIE CRUST RECIPE for the crust or our PIE CRUST MIX is available over at @legitbreadcompany Use code: BACKPORCH10 for 10% off your order!! . Super fun recipe available via the link in our profile! @food52 @ottosnaturals https://bit.ly/32t8Yxo
View on Instagram |
9/9
View on Instagram
Loading Comments...
%d bloggers like this: