Oh so fun! Our Paleo MINI PEAR PIES are certainly eye catching aren’t they!? If you watch The Great British Baking Show over on Netflix, these may seem familiar. Paul Hollywood asked the contestants in this season to make “mini pear pies” during a technical challenge.

I knew from the moment I saw this episode that our original PIE CRUST RECIPE would make these Paleo mini pea pies happen one day. The Paleo and gluten free community needed to be able to enjoy these as well! You can also use our PIE CRUST MIX in collaboration from LEGIT BREAD COMPANY. Just like that, your MINI PEAR PIES are that much easier to make!

You will need two pie crust recipes for this deliciousness, so prepare accordingly! This way you’ll have enough dough to wrap all six pears, having extra for those cute leaf accents and maybe a few pie crust cookies!

The original recipe used white wine to poach the pears in. We do not drink alcohol, so we knew there had to be a tasty sub and pineapple juice was the answer! It adds a touch of sweetness while still allowing the spectacular flavor of the pears to shine. If you want to try out the wine instead, you do you and let us know how it goes.

These mini pear pies would be absolutely lovely as a dessert for an intimate dinner party. While they of course would be AMAZING for your holiday dinner table, they are a bit time intensive to prep. So, here is what we think. Are you possibly in charge of bringing dessert to a holiday meal? Ok then, this might be your addition to the meal.

If you, however, are in charge of the bulk of the meal, you might consider saving this for another day when you have extra time on your hands. Although, my hubby commented after having a few bites “these might be worth the effort!” soooo, maybe they should make an appearance this holiday season!

“On your marks, get set…BAKE!”

a few of our favorite PIES on the blog:

backporchpaleo
•
Follow
📕 Dropping a few teaser pics from the "WHAT TIME is DINNER" chapter included in our upcoming book - we're just a couple weeks from publishing date friends! Dropping on the 21st so they will be perfect for holiday gift giving! Do you have your copies pre-ordered? 👏🏻 . Teasing just a few pics of our favs from that chapter: 🥩 HERBED SUNDAY POT ROAST 🏝️ HAWAIIAN HAYSTACKS 🍔 IP MINI SIRLOIN BURGER SOUP 🐔 CHICKEN N' DUMPLINGS 🥓 BACON INFUSED MAC N' CHEESE . We have a pre-order ebook available for just a couple more weeks, so if you want the 5 BONUS recipes that were cut from the book, now is the time! . And yes, you do see a couple recipes here served over white basmati rice...which we have been able to reintroduce & enjoy on occasion. Do NOT be discouraged, these dishes are easily served over cauli-rice, zoodles, swoodles or even all by themselves. They are scrumptious no matter which way you choose. #youbeyou . Order via your favorite bookstore or Amazon via the link in our profile! https://backporchpaleo.com/cookbook/ @pagestreetpublishing
View on Instagram |
1/9

backporchpaleo
•
Follow
💕This is us...ok, so not the show on TV, but our "us" - today marks the 32nd anniversary of our first date. For those trying to count backwards, it would be the year 1989. Ahem...ya, a ways back. We never would have guessed that "Drew & Michelle" would become a thing! . 32 years ago, I was a single mother of two adorable little girls. Went out on a limb & asked this guy out from work (always a risk right?!) to go to a Christmas concert with me. I'd won tickets on the radio (ya, that was a thing back then) & needed to be assertive in finding a date. I arranged the date & as they say...the rest is history! . All this to say, you just never know where taking a HUGE leap into the darkness of "now what" will lead you. It's a love story we weren't sure how to write, but here we are. We added a couple more kids, many moves, many job changes, more family, an abundance of happy times mixed in with of course, some very hard/sad times. (Hi 2020!) . Most journeys are this way aren't they? You begin & most of the time the "plan" you have for how it will all play out gets tossed to the side. Being replaced with pivot after pivot after pivot. Learning, growing & adapting with life as it comes at you. . Happy Saturday friends! Thanks for being here & if you've read all the way to this point, thank you! Not a food post, but just felt like sharing some history today. If you feel so inclined, share a comment with us about a pivot you made & we'll pick a random winner from the comments for a copy of our cookbook! YAY!!! . Be sure to swipe left, there is quite the vintage picture & we think it's the first picture we have of us together. It's our engagement photo & it was only fitting that those two adorable little girls, Britni (3) & Erika (2), were in that picture...Drew was a Dad waiting to happen & we were an instant family. The final picture is "us" today & all we can say is "MY HOW TIME FLIES!" XOXO 💕 https://backporchpaleo.com #backporchpaleo #thisisus #family #change #growth #anniversary
View on Instagram |
2/9

backporchpaleo
•
Follow
BRINED POPCORN CHICKEN - we're claiming today as FINGER FOOD FRIDAY!!! So how about our finger dippin' delicious popcorn chicken!? Check out the recipe for the BEST brining liquid & it's not what you think! Get those AIR FRYERS ready! . Plus a recipe for DIPPING SAUCE & GARLIC CHIVE PICKLES can also be found on the blog! Literally 3 fabulous recipes in one post! . These are PALEO, WHOLE30, low-carb’ish & crazy delicious & we also have baking directions for your oven! @farmhouseculture @whole30 @food52 @cuisinart . https://bit.ly/30HNCvg
View on Instagram |
3/9 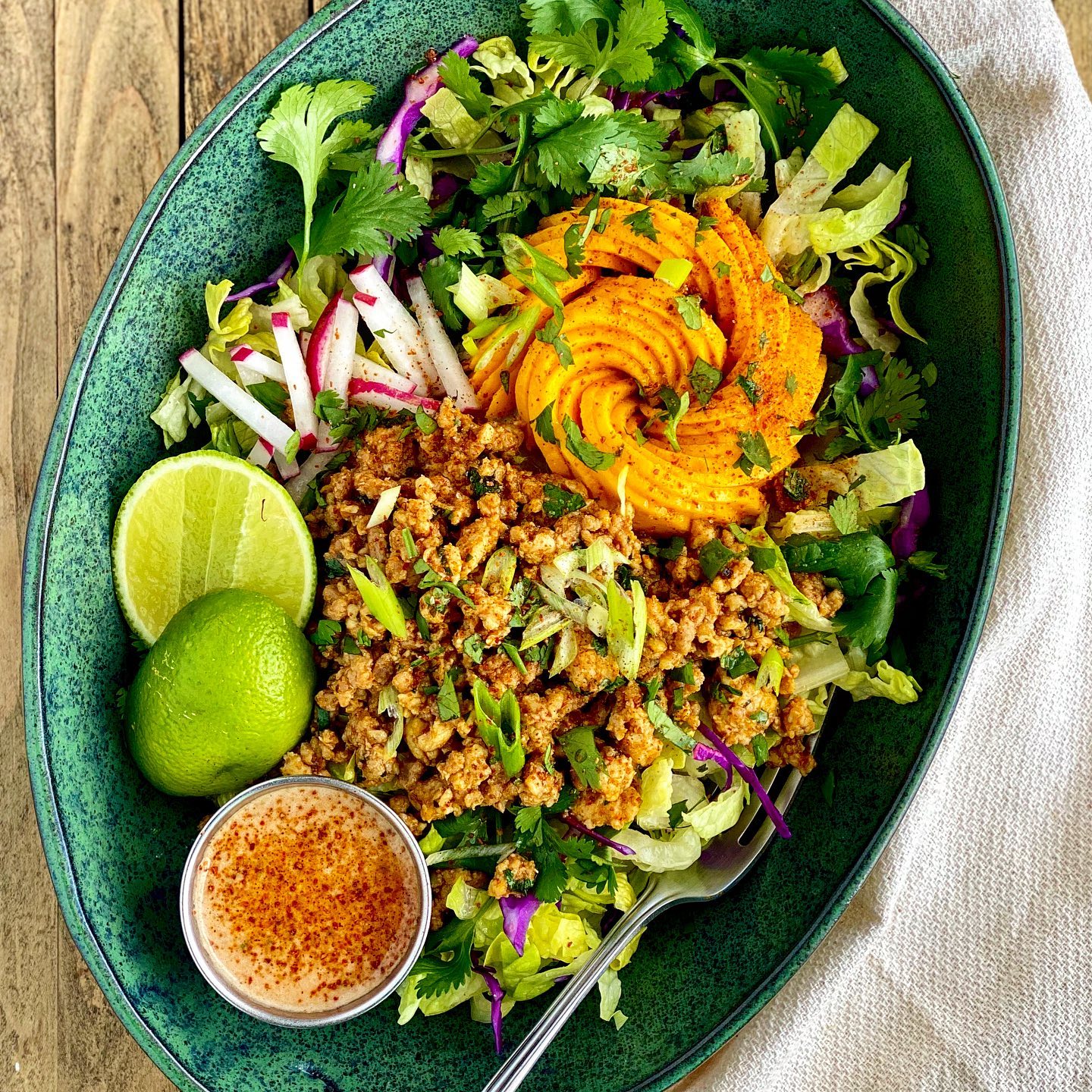 backporchpaleo
•
Follow
Time for some greens ya? How about a big ol’ CHOPPED TACO SALAD ~ exactly the pop of fresh flavor your taste buds are craving! 😎 🥗 . salad: mix of chopped romaine, purple cabbage & cilantro with a sprinkle of sea salt ~ topped with leftover ground taco meat, sliced radishes, pretty MANGO ROSE, sprinkle of green onions & squeeze (or TWO) of lime juice. . dressing: ranch with a dollop or two of @sietefoods chipotle salsa! . All plated up in one of our vintage @nocrumbsleft Patrick bowls ~ pretty spectacular ya!? 🥰 . Recipe for one of our taco meat recipes via the link in our profile ~ such a classic! . https://bit.ly/3famiKn
View on Instagram |
4/9

backporchpaleo
•
Follow
⚽ “Biscuits with the Boss” - Where are our TED LASSO fans out there?! ⚽ A show that will have you laughing, getting teary & overall smiling at any given moment! . A comedy that is into being vulnerable, loads of kindness, growth & of course plenty of SOCCER humor. If you’re a fan, you know what these lil’ pink boxes of biscuits are...if you don't know, now is the time to binge this show. . 🤔 Do we have a favorite character? So hard to pick actually, they’ve all grown so much in 3 seasons & inspire/remind us to “stay awkward, brave & kind” (to quote the spectacular Brené Brown) so the whole cast has our hearts! . #recipebelow for these tasty biscuits & they are of course gluten free, and if you use ghee would be considered paleo...you do you! ENJOY! 1 cup grass fed butter (can sub ghee for Paleo) ¾ cup powdered maple sugar 1½ cups cassava flour 2 tbsp arrowroot ¼ tsp kosher salt ⚽ Prepare an 8” x 8” pan by lining with parchment paper, set aside. ⚽ Add butter (or ghee) to the bowl of a stand mixer and beat til lighter in color and fluffy, approximately 4-5 minutes. ⚽ Slowly add powdered sugar to the butter mixture, mixing til combined. Sift cassava flour, arrowroot & salt into the butter/sugar mixture, mixing again until dough comes together. ⚽ Transfer to the prepared pan & press evenly into the bottom. Place the pan in the refrigerator and chill for 30 minutes. Preheat the oven to 300° while the dough chills. ⚽ Once chilled, place in a preheated oven & bake for 50-60 minutes or until golden but still soft to touch. Remove from the oven & place the pan on a cooling rack, cool completely before cutting. ⚽ Store at room temperature for up to a week. P.S….they won’t last that long! https://backporchpaleo.com @appletv hannah_waddingham @mrbrettgoldstein @brenebrown @junotemple @thefeedfeed @thefeedfeed.glutenfree @food52
View on Instagram |
5/9

backporchpaleo
•
Follow
🍋☀️ LEMON CURD MUFFINS 🍋☀️ - here to brighten up your feed as well as your taste buds. Super tangy, loaded with lemony goodness & perfectly delicious no matter the weather out there! . Head over to the blog & check out this fun recipe via the link in our bio & celebrate #muffinmonday along with us! . @food52 @thefeedfeed @thefeedfeed.glutenfree @thefeedfeed.baking http://bit.ly/30nFgrx
View on Instagram |
6/9 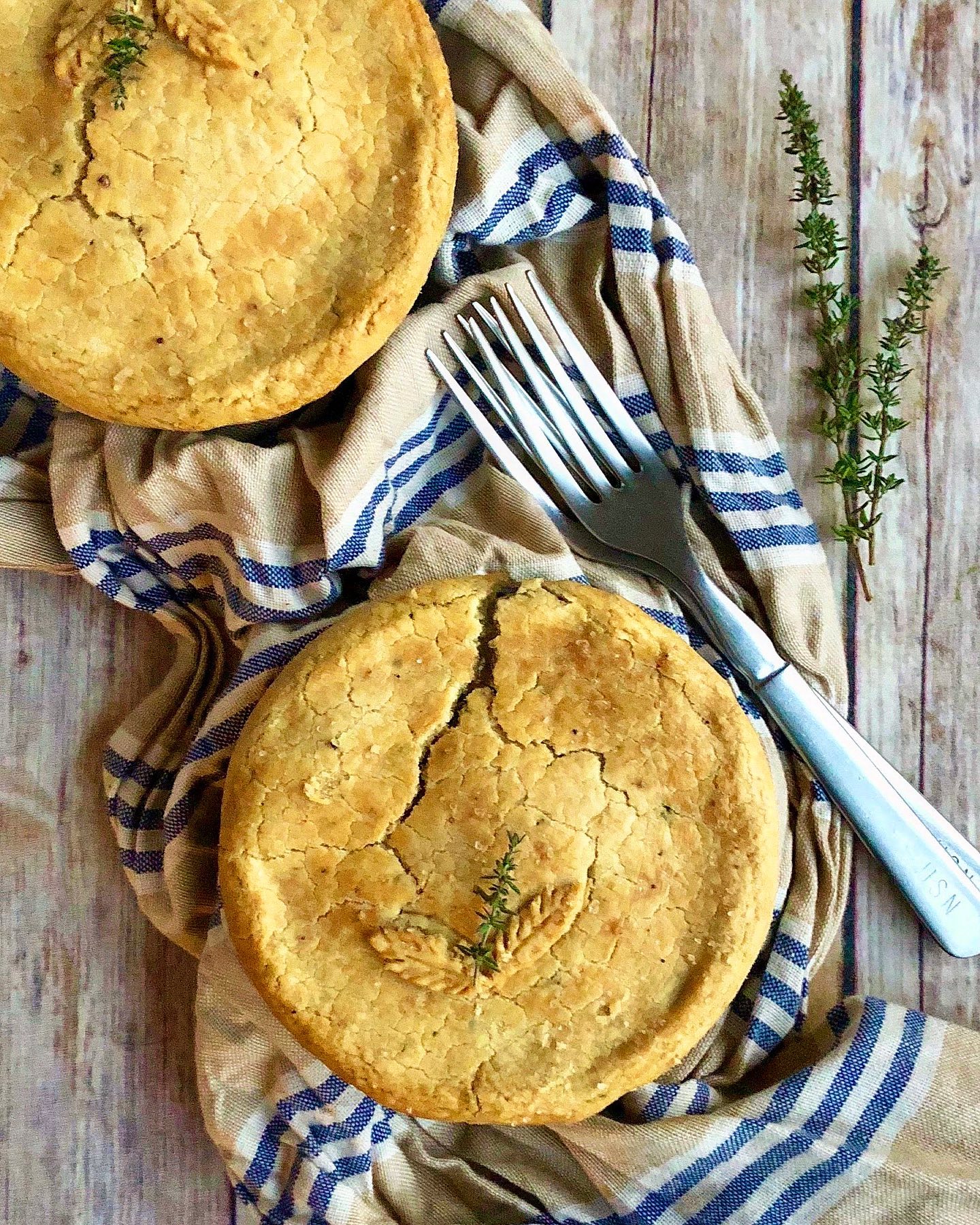 backporchpaleo
•
Follow
🌿 HERB CRUSTED POT PIE - a little leftover inpso for you! Hearty filling that's loaded with veggies, a flaky, herb infused crust up on top. BONUS, the filling also doubles as an amazingly hearty soup - so maybe make a double batch so you'll have plenty of soup for another meal!! . Recipe via the link in our profile! @legitbreadcompany @food52 @thefeedfeed @thefeedfeed.glutenfree . http://bit.ly/2PvJlpm
View on Instagram |
7/9 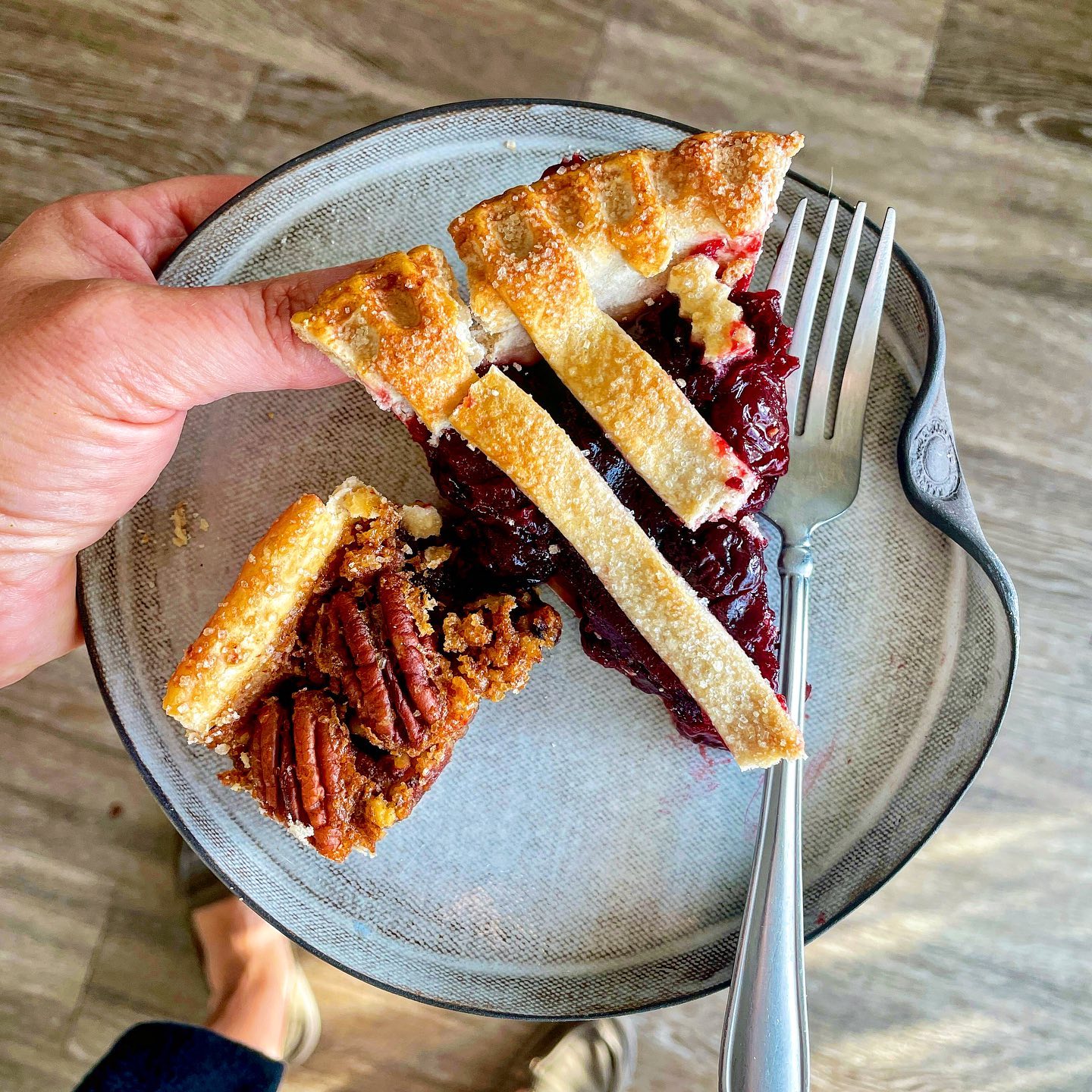 backporchpaleo
•
Follow
😎 Pie…for…breakfast! Two mini slices this morning since it was hard to decide on one or the other 🤣 . Lil’ slice of cherry vanilla & a lil’ square of pecan slab pie on our @nocrumbsleft breakfast plate ~ hit the spot! . 2 of the 10 new pie recipes added to the blog over the last few weeks & it’s been abundantly heart warming to see so many enjoying them ☺️ . Our link in bio will take you to all of them! 😎 Dare you to make just one!! . https://backporchpaleo.com/category/pie-crust-mix/ . @legitbreadcompany @balancedbites #pieforbreakfast #pie #cherrypie #vanilla #piesofinstagram #thanksgiving #homemade #f52grams #feedfeed #glutenfreepie #legitbreadcompany #backporchpaleo #paleo #glutenfree #kitchn #paleopie #legitbreadcompany
View on Instagram |
8/9 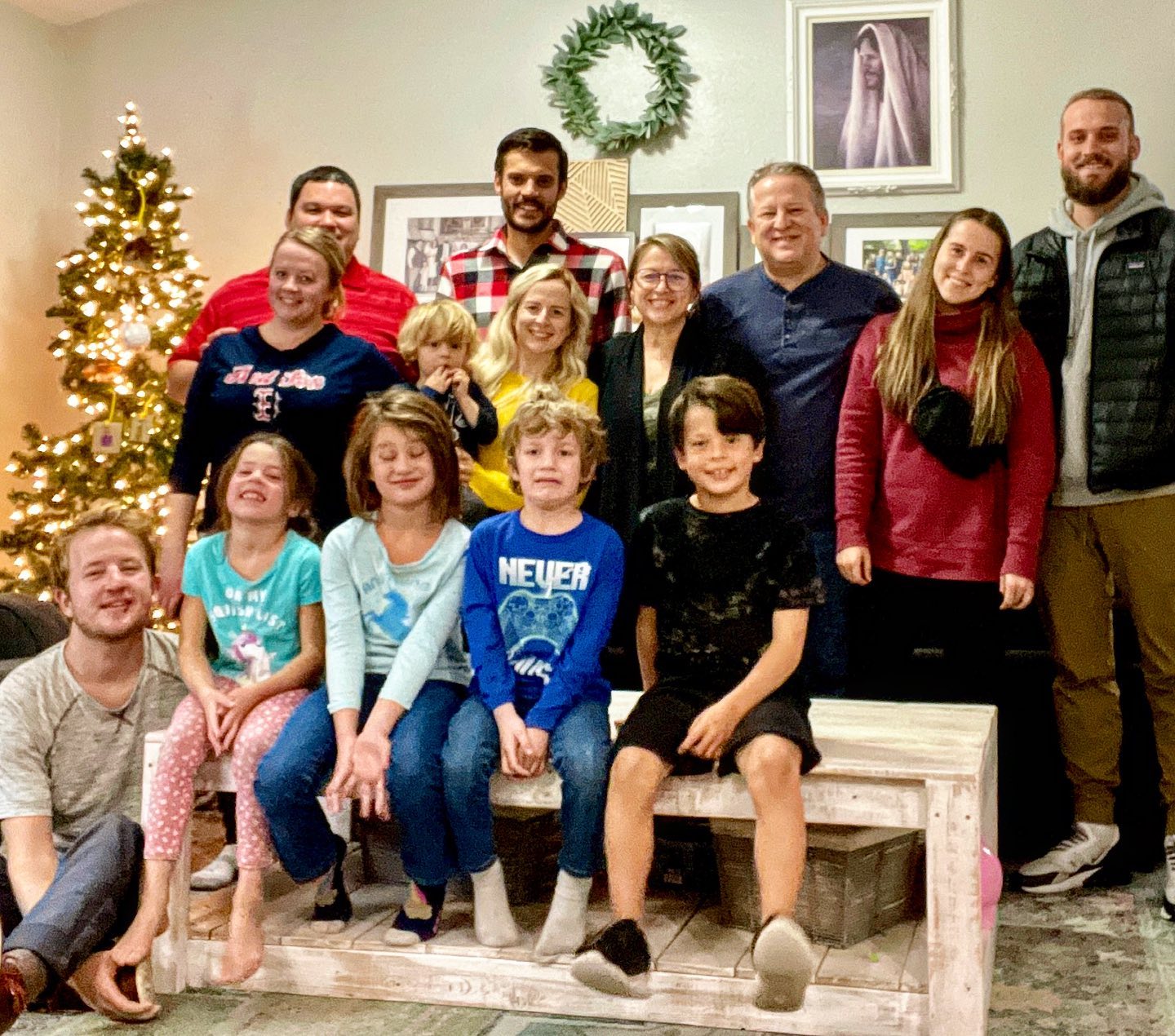